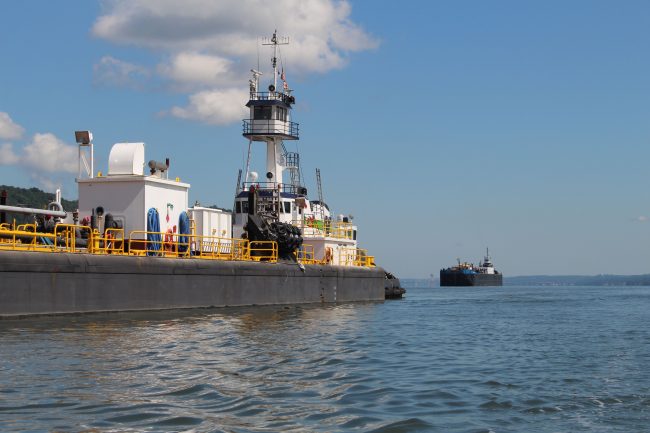 Riverkeeper: 1. They say it’s about safety. But it’s really about oil. In its request to the Coast Guard, the shipping industry made very clear what’s driving this:

“For several years the United States of America has developed as a major energy producing nation and the great port of Albany as a leading export for … trade of American Bakken Crude Oil and Ethanol. Trade will increase on the Hudson River significantly over the next few years with the lifting of the ban on American Crude exports for foreign trade and federally designated anchorages are key to supporting trade.” – Maritime Association of the Port of NY/NJ Tug and Barge Committee, Jan. 21, 2016 letter to U.S. Coast Guard

The anchorage request is part of something much bigger – it comes amid a number of efforts to significantly increase the use of the Hudson as an oil shipping hub. Projects are in the works to expand the ports of Albany and Coeymans, for example, and increase the carrying capacity of the crude oil rail line from Buffalo to the coastal refineries. In addition, the Global oil terminal in Albany is fighting to gain permission to heat heavy “tar sands” crude for transport down the Hudson.

Until 2012, crude oil was not an issue on the Hudson. Starting in 2012, the Hudson became a shipping corridor for about 25 percent of the oil coming from North Dakota.

Several accidents around the country clearly show that crude oil cannot be recovered or cleaned up if it is spilled into a waterway. As one NOAA spills expert said to us: We’ll just have to get used to the idea that we can’t recover Bakken after a spill.

And crude oil is poison for life in the river. After the oil train disaster in Lac Megantic, Quebec, where 47 people were burned to death, some of the oil ran into the Chaudière River, studies have found a dramatic increase in the presence of lesions, fin erosion and other deformities in many species of fish.

2. The sturgeon were here first. Several of the proposed anchorages are in areas relied upon by sturgeon for their survival. Both species of Hudson River sturgeon – Atlantic and shortnose – are on the endangered species list. Anchors and anchor chains scar and disturb the river bottom, where sturgeon spawn and feed and rest.

Before any new anchorages are approved, researchers must determine definitively whether the disturbance to sturgeon habitat is detrimental or not. The sturgeon were here first.

3. Blindingly bright and exceedingly loud. Until fall of 2015, northbound crude oil tugs and barges anchored between Rhinecliff and Port Ewen waiting for loading terminals in Albany. Before 2012, that reach of the river was quiet, dark and serene at night. But stadium lighting and generator noise on the barges ended that. That’s when residents of the community started complaining to the Coast Guard. How will noise and light pollution affect communities near the other proposed anchorages? Each community will have to speak up.  Read more.