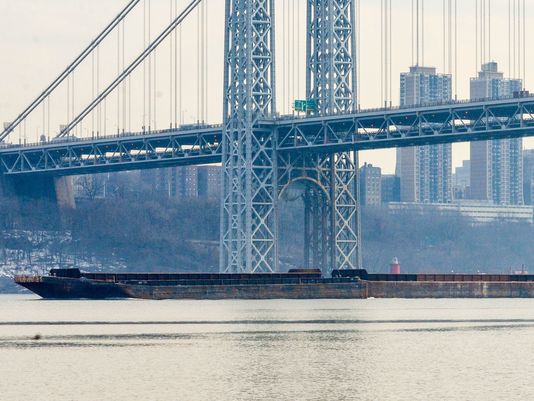 NorthJersey.com: Just north of the George Washington Bridge near the preserved banks of Palisades Interstate Park lies a 715-acre section of the Hudson River that could soon become a virtual parking lot for the scores of oil barges that travel the waterway.

The U.S. Coast Guard is evaluating a proposal that would allow up to 16 barges to drop anchor in the middle of the river between Alpine and Yonkers, N.Y., to accommodate an expected increase in the amount of oil hauled to and from Albany N.Y.

It is the largest and southernmost of seven proposed anchorages on the Hudson, and has galvanized local officials, residents and environmental groups in New York. They say the plan is an environmental threat that will “re-industrialize” the river, make it unsightly and increase the risk of an oil spill. Supporters say it will make the river safer by having more places to anchor with increased traffic.

The issue, however, has gone largely unnoticed in New Jersey even though more people live along the state’s 26 miles of waterfront than ever before. Of the 10,212 comments sent to the Coast Guard about the project, few came from New Jersey.

“It’s the forgotten river for so many here, but this proposal will affect New Jersey, no question,” said Gil Hawkins, president of the Hudson River Fishermen’s Association, who lives in Leonia. “When you go to the Palisades and look down and see these giant oil barges instead of small boats or eagles hunting fish, maybe then people will realize how important this issue is.”  Read more.