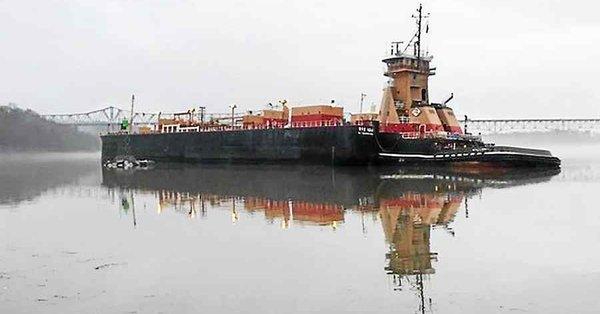 NRDC: A barge transporting 60,000 gallons of gasoline ran aground along the Hudson River in Catskill, New York earlier today. While no injuries have been reported and so far, there has been no fuel found leaking into the river, this accident highlights the real risk we face by encouraging more barges to travel and park in the Hudson River, turning this historic waterway into a fossil fuel parking lot.

This time, the barge was carrying gasoline, but next time, it could be crude oil, much like the barge that ran aground in 2013. More berths would lead to more barges traveling the river, which could increase the risk of crude spills, which are notoriously difficult to clean up, and which could have catastrophic ecological effects on the river’s ecosystem. If tar sands oil were to eventually be shipped by tanker on the Hudson, the risks to the ecological health of the river are even greater. Indeed, according to the National Academy of Sciences, tar sands oil is extremely difficult to recover if spilled.

We are grateful no one was hurt this morning, and that the barge that ran aground did not leak. But fossil fuels are dangerous. Creating anchorage grounds along the river that may be used to store oil threatens the safety of our communities. It’s time to put this flawed proposal to bed, and turn our attention toward building a clean energy future.  Read more.