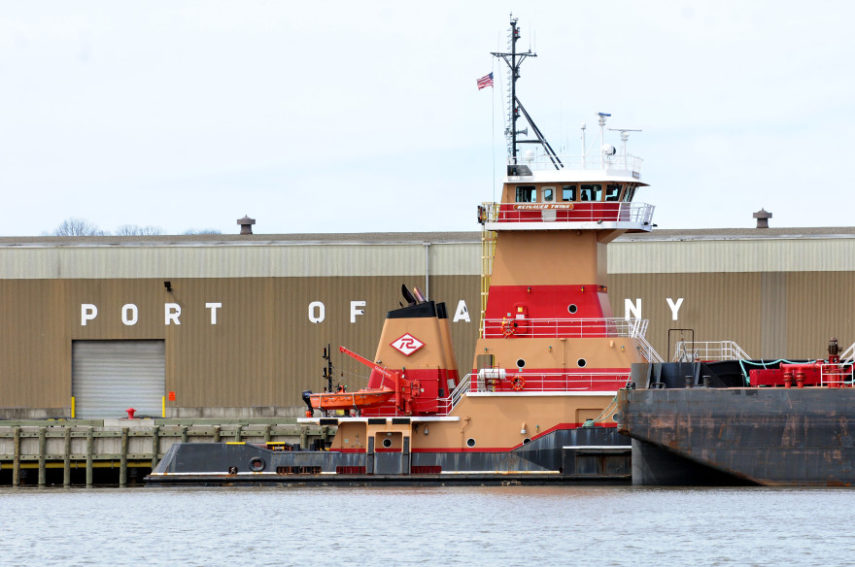 New York World: A pair of oil barges idling at the Port of Albany loomed over the waterfront recently, dwarfing two tugboats and a flock of seagulls that floated by on the Hudson River.

The barges, both 116 feet long and tethered to tugboats, were preparing for their trip south on the river, laden with oil. The tugboats that would guide them — the Dean Reinauer and the Reinauer Twins — are two of 14 tugboats that ferried crude oil barges down the Hudson River last year, according to ClipperData, a company that tracks the shipping industry.

It’s the last leg of a journey that began in the Bakken Shale Formation of North Dakota, where a recent oil boom has transformed the once-sleepy Port of Albany into a major transportation hub for domestic crude oil.While fiery train derailments across the U.S. and Canada have drawn New Yorkers’ attention to the dangers of transporting crude oil by rail, there has been much less focus on the potential dangers of shipping oil down the Hudson River by barge. But some environmentalists worry that a crude oil spill would wreak havoc on a river that has recovered well after enduring decades of industrial pollution that nearly destroyed it.

In addition, safety regulations governing tugboats have not been renewed despite a decade-old congressional directive; and the U.S. Coast Guard’s spill-response plans for the Hudson River were not updated after oil shipments began swelling four years ago.

“Everyone points to barge traffic as potentially having the most immediate catastrophic impact,” said Roger Downs, a director at the Sierra Club in Albany who has spent most of his life living by the river and working to revive it.  Read more.