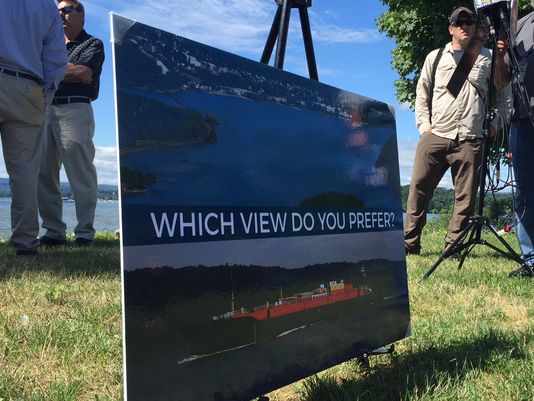 Lohud.com Op-Ed: While the U.S. Coast Guard no doubt does good work in facilitating safe and efficient marine transportation, it’s questionable whether the Coast Guard is well suited to dealing with the broad range of non-maritime issues that are involved in the so-called “Anchorage Grounds” proposal.

For those not aware of the ongoing controversy, the Coast Guard has been asked to consider a proposal by the Maritime Association of the Port of New York & New Jersey and several other industry groups to establish extended “Anchorage Grounds” for boats and barges in the middle of the Hudson River — running from Yonkers to Kingston. One doesn’t have to be an expert on ecological/environmental matters, or on issues of public health & safety, to question the wisdom of anchoring 600-foot barges in mid-river (many of them filled with petroleum products).  But I will leave it to others with expertise in these matters to explore those issues. What I would like to address here are a number of serious social, economic, and quality-of-life threats that the proposal poses to the entire region.

Communities up and down the Hudson River have been involved over the past few decades in a multitude of efforts using hundreds of millions of local, state, and federal dollars — as well as a great deal of private funding — to turn around their decaying waterfronts. These efforts by individuals, by various levels of government, and by non-governmental organizations have been very successful. They have helped to restore the natural ecology and beauty of the river; they have spurred “smart development” and enhanced the quality of life for the public as a whole. Indeed, most sensible people have come to assume that we’ve forever put behind us the old mentality in which our waterways were seen as expendable — providing sites for dirty industries, endless parking lots for boats and barges, and places to dump all sorts of industrial and human waste.  Read more.