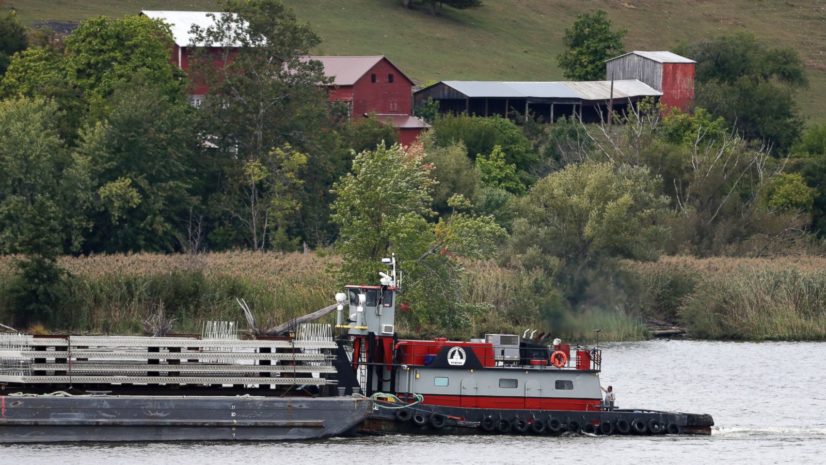 ABC News: From her clifftop cottage, Carolyn Marks Blackwood enjoys a sweeping view of the Hudson River and distant Catskill Mountains that once inspired the painter Frederick Church. Now, she says, the riverscape has been turned some days into a noisy parking lot for barges hauling North Dakota crude oil to East Coast refineries and export terminals.

And she fears it will only get worse if a proposal is approved to expand such sites up and down the river.

“Huge barges parked for days in front of my house, with stadium lighting at night and the constant sound of generators,” Blackwood said of the traffic that began three years ago after train shipments of the crude began coming in to Albany, about 50 miles upriver.

Blackwood, a filmmaker from Rhinecliff, is among a group of Hudson Valley citizens, lawmakers and environmentalists who are fighting a proposal to establish more than 40 commercial anchorage sites at 10 locations along a 70-mile stretch of river from New York City to Kingston.

Pilots and industry officials say they need safe places to anchor, sometimes for days, as they wait for weather improvement, icebreaking, tide changes or docking space at their destination.The main concern is increased crude oil shipments. Opponents cite potential risks to public safety, drinking water, recreation, waterfront revitalization, fish spawning grounds and the overall health of a river that has been slowly recovering from its industrialized past. And some environmental groups suspect the anchorages will actually be used to store oil on barges until prices recover from a glut of oil that began at the end of 2014.  Read more.