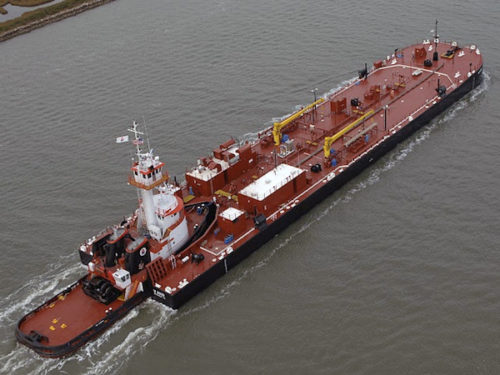 Trade Only Today: The Hudson River could see a significant increase in anchored articulated barges under a proposal from the Maritime Association of the Port of New York/New Jersey.

If approved, the anchorages, totaling more than 2,400 acres, would allow for storage of as many as 43 articulated barges carrying Bakken oil between Albany and New York Harbor.

BoatUS is encouraging Hudson River boaters to let their voices be heard on the proposal by submitting comments to the U.S. Coast Guard here before Sept. 7

“We believe in a strong marine transportation system and recognize our country’s energy needs are important,” BoatUS government affairs manager David Kennedy said in a statement. “However, we have concerns about the size and scope of the proposal that would site anchorages on waters heavily trafficked by recreational boaters, as well as reduce the width and in some cases occupy the navigable channel for all vessels.”

Nine of the 10 anchorages are proposed to be for long-term use, alarming environmental groups, as well as BoatUS.