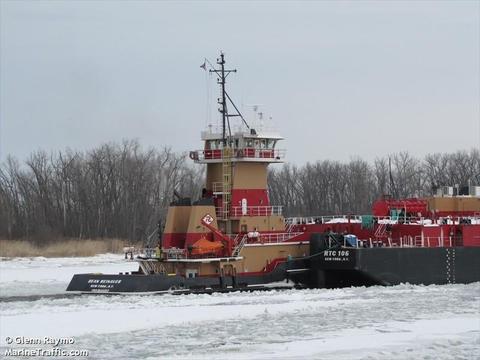 Rhinecliff.org: The Coast Guard is planning to add ten locations where commercial vessels can drop anchor on the Hudson River, and three of them are right here in the Rhinecliff area. As reported in lohud.com, the additional anchorages are meant to make river traffic safer and more efficient, but they may also be a source of controversy for the cities, towns, and hamlets along the Hudson.

The Coast Guard will accept written comments on the proposal until September 7, but the deadline for requesting a public meeting is June 30.  The instructions for contacting the Coast Guard are here, and a more detailed description is in the Federal Register, here.  It’s very easy to submit comments online here.

The vessels that anchor in this area are often returning to Albany to pick up crude oil.  A spill would have devastating effects on the environment and local economy.  Even as it is, the barges at anchorage are a serious annoyance.  For safety, the barges are required to maintain bright lights all night long, so they cause visual pollution, and they run generators 24-7, causing noise pollution as well.  They are a constant disturbance to those who live along the river. 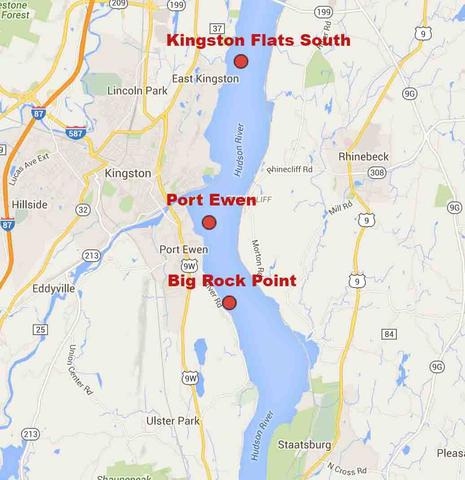 The three locations near Rhinecliff are Kingston Flats South, Port Ewen, and Big Rock Point.  That means anyone living along the River from East Kingston down to below Port Ewen, along both shores of the Hudson, are subject to the disturbance and pollution.  The Kingston Flats South anchorage, which would allow for up to three vessels, is also where developers are planning to build a large housing project along the western shore.

How fracking brought barges to Rhinecliff

Under current regulations, commercial vessels such as barges and their attending tug are actually prohibited from anchoring in the area of the proposed anchorages.  The regulations say vessels may “occasionally anchor overnight in the vicinity of Kingston . . . to await daylight hours for passing through the constricted part of the river.”  But vessels are not supposed to anchor for days at a time.The barges were never a problem before, partly because of this regulation and partly because there wasn’t much need to anchor here in the first place.  Vessels would anchor near Yonkers or one of the other approved anchorages on the Hudson.

But space became scarce between New York and Albany as more and more oil came to be transported on the Hudson and vessels needed to find other places to wait for a place in the ports.  In 2011, oil terminals in the Port of Albany (operated by Global Partners and Buckeye Partners) were approved for expansion to keep up with the increased demand.

Then in 2012, big changes took place.  As John Lipscomb reported in November 2013 on Riverkeeper, “In the last 12 months, a new industry has started on the Hudson River, as shipments of crude oil from the Bakken fields of North Dakota have arrived by rail in Albany, for shipment by rail and barge to refineries in New Jersey and the east coast, and by tanker as far away as New Brunswick, Canada.  These shipments are something new to the river—we’ve never had this type of oil transported on the Hudson before.”

The New York Times also took note of how fracking was changing the Hudson in an excellent article about the fracking crude passing through Albany.  “With little fanfare,” wrote the Times, “this sleepy port has been quietly transformed into a major hub for oil shipments by trains from North Dakota and a key supplier to refiners on the East Coast.”  In 2014, trains were arriving twice a day from North Dakota.  The oil is then transferred into giant storage tanks before being loaded onto barges that make daily trips to refineries down the Hudson. 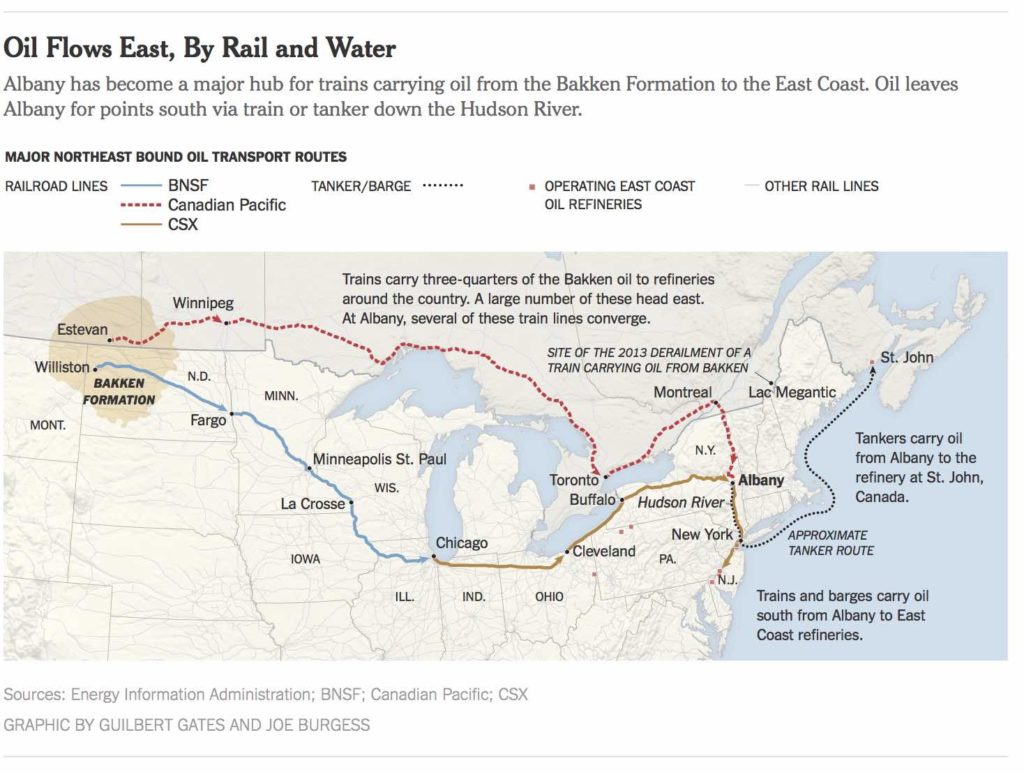 With the increased river traffic, the approved anchorages became insufficient, and barges began anchoring off Rhinecliff, not just overnight, but for several days at a time, waiting for a spot to dock in the Port of Albany.

From late 2012 through the spring of 2015, the barges were a constant presence on the river in the Rhinecliff vicinity.  A barge would anchor for three or four days, often longer, waiting for a position at the Port of Albany.  As soon as one barge departed, another would take its place.  Sometimes there were two or three barges anchored around Rhinecliff all at the same time.

Then last year, the drop in oil prices slowed down the rail shipments to Albany and the river traffic down to New York.  The anchorage problem finally came to an end last summer after complaints from Rhinecliff got the Coast Guard to enforce the prohibition against barges anchoring here for more than an overnight stay.

A statement from the Coast Guard, distributed in October 2015, indicates that there have been “reports of commercial vessels, including tugs and barges, anchoring outside designated anchorage areas along the Hudson River.  Commercial vessel operators anchoring in the Hudson River are reminded to anchor only in authorized, federally-designated Anchorage Grounds.”  The statement includes maps showing the authorized locations.

If the Coast Guard goes through with its plans to create anchorage locations off Rhinecliff, we will once again see large commercial vessels sitting in the middle of the river, day after day.

Just to give an example illustrating how constant the barge traffic can be, consider this example.  Using the website Marine Traffic, one can track the location of all the vessels on the Hudson (and anywhere else for that matter).

On December 18, 2014, the tugboat Reinauer Twins arrived from the south and set anchor off of Rhinecliff.  It remained there until December 22.

This map shows the location of the Bruce McAlister during this time.  The cluster of dots shows where the tug circled around its anchor as the tides shifted.  (The data set on which the map is based can be found here.  Click on a location marker to see the date and time.)

The risks of a spill

“The Hudson River has long been part of shipping routes for other petroleum products, like heating fuel and gasoline,” writes the Riverkeeper in an excellent report about crude oil transport and all its dangers.  But it wasn’t until late 2011 that crude oil began being transported on the Hudson.

The crude “poses a new risk due to its characteristics as a pollutant and the massive volume being transported,” writes Riverkeeper.  “A spill of crude oil in the Hudson River could devastate the ecosystem, put people’s health at risk and harm the regional economy, setting back decades of effort and billions of dollars invested to restore the river’s ecosystem.”

It’s not an unfounded fear.   Back in December 2012, an oil tanker named the Stena Primorsk ran aground about 6 miles from the Port of Albany. The ship was carrying 12 million gallons of crude oil—about the same amount spilled by the Exxon Valdez. The ship’s outer hull was breached, but a second hull prevented a spill that would have devastated the area around Schodack Island, a prime shad and herring spawning habitat, and an irreplaceable state-designated habit noted for the abundance of waterfowl.

The possibility of a spill is also disturbing for our area because Rhinecliff and Rhinebeck, as well as many other communities along the river, get their drinking water from the Hudson, right where the vessels anchor.

In order to change the federal regulations governing anchorages, the Coast Guard must go through what’s called a rulemaking process.  As part of the process, it must also seek public comment.

The announcement for the rulemaking says that the Coast Guard received requests for establishing new anchorages from the Maritime Association of the Port of NY/NJ Tug and Barge Committee, the Hudson River Port Pilot’s Association, and the American Waterways Operators. (It’s possible that these associations have been lobbied by the companies that own the vessels.)

“The public is encouraged to participate in this rule-making process,” Commander Ellis Moose, chief of prevention in the New York sector, said in a statement. “We are in the preliminary, exploratory phase of this process. We understand this proposed rule-making expands beyond the maritime community and welcome feedback from local stakeholders working and living around the Hudson River.”

Requests for public meetings must be received by the Coast Guard by June 30.  Written comments are due on September 7, 2016.