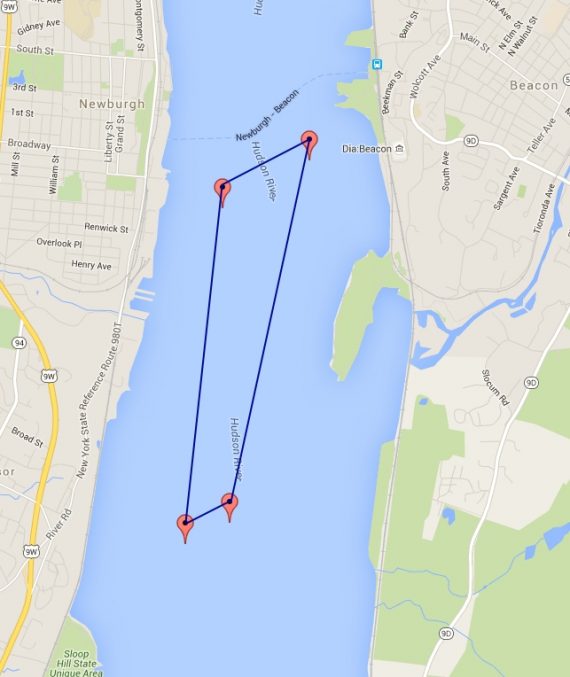 Highlands Current: The U.S. Coast Guard is considering 10 sites for overnight barge parking lots, called anchorage grounds, on the Hudson River between Yonkers and Kingston, including 445 acres between Beacon and Newburgh, an area large enough to berth up to five barges.

There is currently only a single anchorage ground, near Hyde Park, along the 100-mile river stretch from New York City to Albany, which the Coast Guard says raises safety concerns.

“It’s just like driving a big-rig truck, you’re under stress and time is money,” explained Lt. Karen Kutkiewicz, a spokesperson with the First Coast Guard District in Boston. “Companies want to drive through, but that’s not safe. There needs to be a safe place for them to drop the hook for the night and then continue on their voyage. Especially when there’s ice on the river and then it’s an even slower transit.” 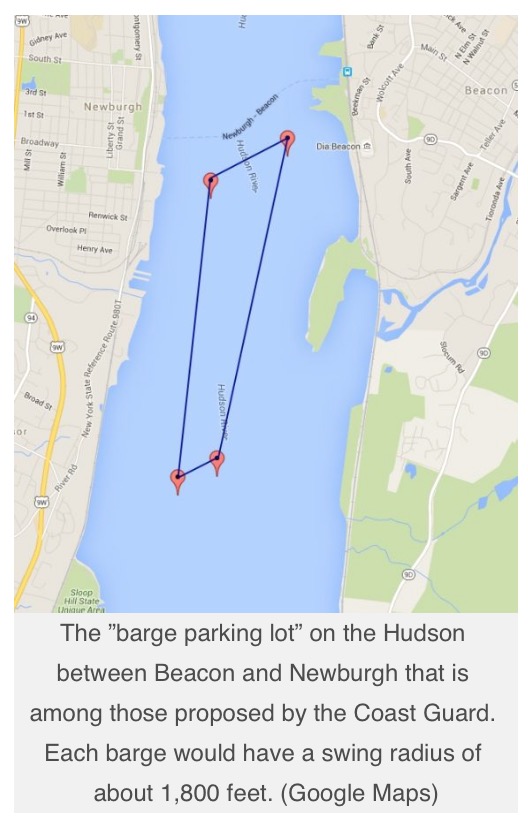 The ”barge parking lot” on the Hudson between Beacon and Newburgh that is among those proposed by the Coast Guard. Each barge would have a swing radius of about 1,800 feet. (Google Maps)

Although the proposal is at its earliest stage of development, it has drawn concern from municipalities and environmental groups, which have requested public hearings.

“It would certainly be an eyesore for us, as it would affect our viewshed,” said Beacon Councilmember George Mansfield. “It also would affect our access to the river, kayaks, fish habitats, and the levels of noise and light pollution. There’s really no upside in it for us.”

Mansfield said Mayor Randy Casale had sent a written request to the Coast Guard for a public hearing and also was discussing the issue with other mayors.

Although the deadline for a public meeting request was June 30, Kutkiewicz, told The Current there “absolutely” would be public hearings in 2017.  Read more.