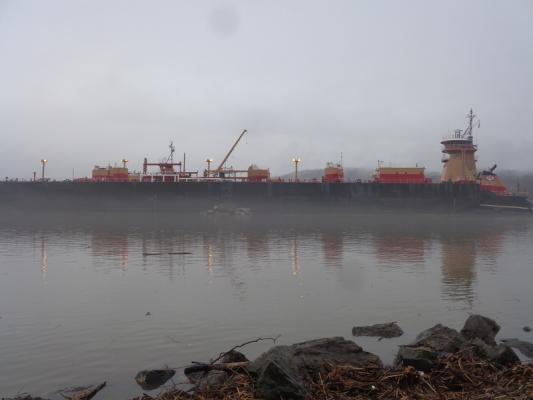 Hudson Valley 360: The state Department of Environmental Conservation has released an “After Action” report following an incident from April where a Reinauer Transportation LLC barge carrying over two million gallons of gasoline ran aground on the Hudson River near Dutchmen’s Landing in Catskill.

The report determined there were no violations of Environmental Conservation Law, but treacherous weather conditions along with pilot error are being considered as potential contributing factors to the barge running aground at around 8:35 a.m. April 4.

The barge was being hauled by the tugboat “Meredith” to the Port of Albany. The on-duty crew members named in the report are Capt. Steven Hardy, Dan Murray, Tyler Cooper and Ed Nadeau. Off-duty crew members Gerald Scott, Tony Gobin and Drew Aversano were also on board.

Hardy was interviewed at around 12:30 p.m. April 4, more than four hours after the incident, by DEC Environmental Conservation Investigators Aaron Markey and Matthew Nichols and Environmental Programs Specialist David Picket aboard the tugboat. The men were the first and only outside official personnel to communicate with the captain April 4. U.S. Coast Guard officials interviewed Hardy and his crew the next day, according to the report.

Most of the communication with Reinauer personnel took place on the day of the incident, DEC Executive Deputy Commissioner Kenneth Lynch said Tuesday.

“That’s when you get the most accurate information,” Lynch said. “I believe there was some followup with the company.”

Hardy told investigators he was operating the tugboat heading against the current north along the east side of the Hudson River, navigating in close to zero visibility because of fog and relying on electronic navigation equipment, according to the report.

At around 8:15 a.m. Hardy attempted to navigate to the west and back to the center of the channel, but heavy incoming tidal current began pushing the tug and barge sideways resulting in an overcorrection of course. Hardy tried to turn back north, but the barge ended up colliding with rocks adjacent to the channel marker, north of the Catskill Creek outlet.

Fog rolled in quickly and was considered the root cause of the accident, Reinauer spokesman Gary Gould said Tuesday.

“It was an unfortunate incident that came out with good results and something to hold onto and learn as we go forward,” Gould said. “Overall we were very happy with the results.”  Read more.