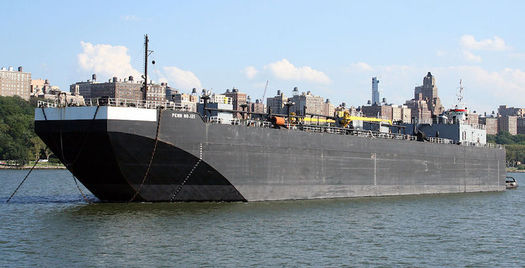 Public News Service: A proposal to establish 10 anchorage points for commercial vessels traveling the Hudson River is coming under fire.

The plan would create berths for up to 43 ships and barges between Yonkers and Ulster County.

Andy Bicking, director of public policy with the environmental group Scenic Hudson, says not only would the plan turn reclaimed waterfront into industrial areas, the anchorages would affect wildlife habitat and potentially threaten air and water quality.

“Many of the barges are carrying highly volatile oil from the Bakken oil fields in North Dakota, and the risk of a spill, of course, would be disastrous to the region,” he points out.

Shipping companies say barges have been using the anchorage sites for years to avoid fog, ice and other hazards on the river.

The U.S. Coast Guard has ordered shipping companies not to anchor in any undesignated locations except in special circumstances.

Bicking acknowledges that there are safety concerns, but maintains creating new anchorage sites could have other consequences.

And Bicking points out that the barges and the oil they carry support very few jobs in New York state, while the risks fall on local communities.

The public has been following the proposal closely and the Coast Guard is considering holding public hearings. Bicking adds many elected officials are raising concerns as well.

“Mayors, county executives, Sens. Gillibrand and Schumer have all expressed alarm about the proposal and have called for the public hearings, and in some cases, a full environmental review,” he stresses.

The Coast Guard is accepting public comments on the proposal through Sept. 7.