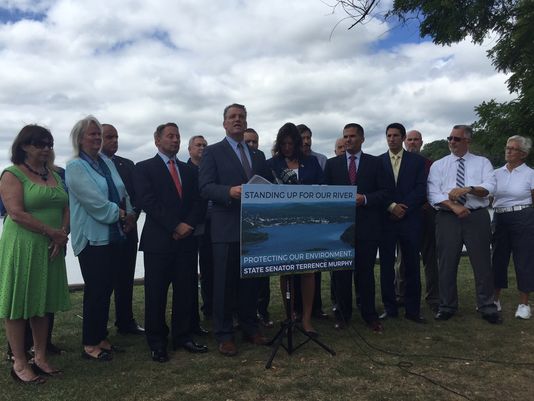 lohud.com: A bevy of local officials are trying to give the region the public hearing on the proposed Hudson River anchorages they perhaps should have had in the first place.

At a Wednesday afternoon press conference at George’s Island Park, state Sens. Terrence Murphy, R-Yorktown, and Sue Serino, R-Hyde Park, said they are inviting the Coast Guard, the commercial shipping industry, local officials, environmental groups and concerned citizens to what they are billing as a public hearing at Croton Village Hall on Oct. 19 at 7 p.m.

“Could you imagine barges, 1,500-foot barges, docked right out there?” said Murphy, who is running for re-election along with Serino. “This is vital to our ecosystem, it is so vital to our environment and so crucial to our economy that we make sure we get the answers we need.”

Murphy, surrounded by officials from the local and state level, said that if the Coast Guard and shipping industry decline to come in October, they will have more hearings for the public.  “We’re going to keep having them until they come and answer their questions,” he said.

As part of its rule-making process, the Coast Guard has an initial public comment period, then considers any adjustments to the proposed rule before holding a public hearing. In the case of the 10 proposed commercial anchorage grounds stretching from Yonkers north to Kingston, with grounds near Montrose and Stony Point, the hearing would be in the spring. Read more.