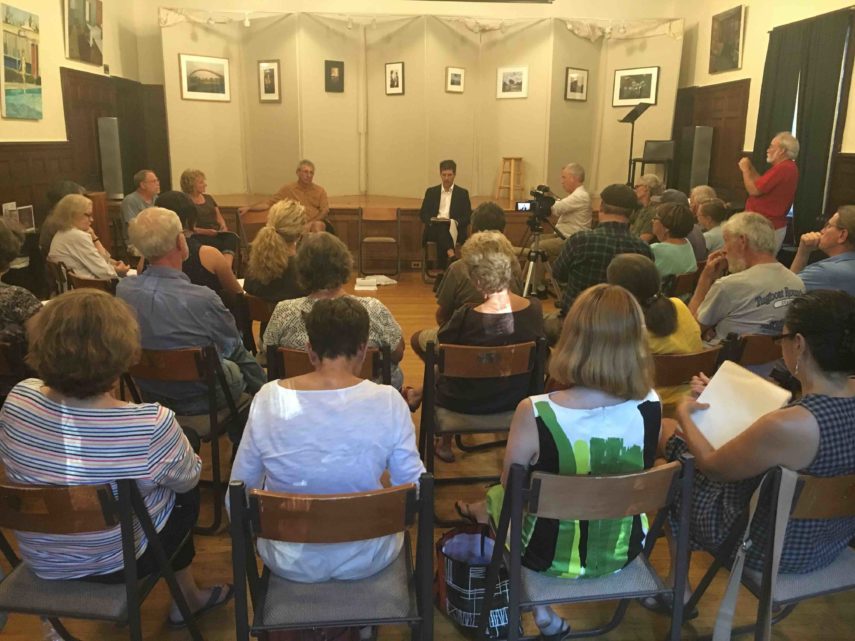 At last night’s meeting in Rhinecliff, there was a debate about why the pilots association and shipping industry have requested ten new anchorages on the Hudson River.  Those speaking on behalf of the anchorages, including some Hudson River pilots, claimed that the request was all about safety, while others (like me) argued that the need for new anchorages was about transporting fracking oil.

There’s no need to debate this issue, however.  In its letter requesting the anchorages and explaining why they’re necessary, the Maritime Association of the Port of New York/New Jersey points directly to the growth of the oil business.

Here’s how the Association begins the discussion section of its letter (italics added):

For several years the United States of America has developed as a major energy producing nation and the great port of Albany as a leading export port for Jones Act trade of American Bakken Crude Oil and Ethanol.  Trade will increase on the Hudson River significantly over the next few years with the lifting of the ban on American Crude exports for foreign trade and federally designated anchorages are key to supporting trade….

Within the last few years, traffic on the Hudson River has increased dramatically and the use of the Kingston Hub (Kingston, Port Ewen, and Big Rock) anchorages have proven to be highly valuable to the commercial marine industry and cited in the United States Coast Pilot 2 as an anchorage area.

Those worried about how the anchorages will facilitate barge traffic transporting crude oil have not invented this concern.  The Maritime Association itself acknowledges that it’s all about the oil.

A related issue in the debate has to do with how long the barges are typically anchored.  The industry claims that the barges typically anchor for only a few hours, just enough time to allow the pilots to get some rest or wait for the fog to clear.  In their letter of support for the anchorages, the American Waterways Operators (AWO) writes the following:

AWO members understand that tugboats and barges share the river, and operate in a way that protects the safety of other users. It is in every operator’s interest not to keep vessels anchored when it is safe to move them, and in most parts of the river it is rare for any vessel to be anchored for lengthy periods. In most cases, vessels are anchored for no more than 12 hours; the most common practice is to anchor for 4-6 hours as the vessels move at daylight or as the tide comes in.

Over the past few years, however, vessels were typically anchored not for a few hours but for days at a time, often on beautiful summer days when there was no discernible problem with the weather.  It was also common to see one vessel depart from its anchorage off Rhinecliff only to have another take its place a few hours later.

The barges were not anchored for safety reasons like weather conditions.  They were waiting for a spot in the Port of Albany, where they would take on another load of crude.

It should also be noted that what happens in the Hudson Valley could have repercussions across the country.  The letter from the American Waterways Operators continues as follows:

While the towing industry is willing to make these accommodations [like limiting the night lights], Coast Guard policy must not be driven by aesthetics but by safe usage of the waterways. There are many other navigable waterways in the United States where commercial users interface with residents and as the waterways become more congested and population areas expand, it is necessary to ensure that navigation safety continues to be a priority. AWO believes the District’s decision on anchorage placement in the Hudson could establish a meaningful precedent for the availability and usage of anchorages in other parts of the country as well.

The industry would like to frame the debate in terms of aesthetics versus safety, but that’s not what the argument against the anchorages is all about.  The new anchorages are parking spaces intended to accommodate the increase in traffic that’s associated with the rise of the fracking industry and the removal of the ban on U.S. oil exports.  If the Coast Guard approves these anchorages, it will not only endanger the Hudson River and its riverside communities, it will also set a precedent for the rest of the country as well.