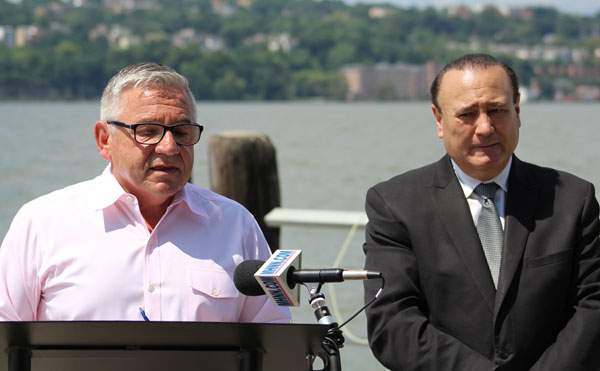 MidHudsonNews.com: More elected officials are coming out in opposition to potential short and long term anchorage points for commercial vessels on the Hudson River.

Assemblyman Frank Skartados (D – Milton) brought together elected officials and leaders from local environmental organizations from the municipalities in his district to oppose the idea docking commercial ships and barges.

There has been some confusion as to what exactly is being asked of these Hudson River communities, where the barges would be placed, for how long and how large they will be, along with uncertainty about what can be done about it and when. It was presented as a 10-location, 43-barge total layout to span from Yonkers to Kingston, but the previously mentioned details were elusive.

A scale image released shows that the long-term, five-barge anchorage designed for Newburgh, the one that causes a direct impact to the municipalities of the 104th District, is not actually in Newburgh. The image shows that the five connected barges would occupy the channel directly between Beacon and Newburgh, spanning the distance from approximately Plum Point on the Orange County side, reaching north well past Denning Point on the Dutchess County side. It will occupy a width of 1,800 feet and stretch over two kilometers in length, having a total perimeter of 7.10 km occupied in the center of the river.  Read more.