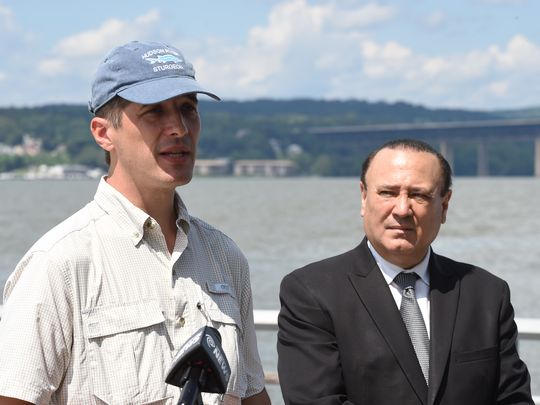 The 31-year-old Poughkeepsie resident said he routinely comes to the edge of the Hudson River to drop his pots.

“It’s a peaceful place to be, to enjoy nature and the surroundings,” he said. “Even if I don’t catch anything, it’s relaxing to be out here.”

With that in mind, a wide coalition of local and state officials gathered at Long Dock Park Friday to draw attention to a federal proposal for 10 new rest stops for ships, including oil barges, up and down the river.

Led by state Assemblyman Frank Skartados, D-Milton, a group that included at least four local mayors and town supervisors joined environmental advocates to call on the U.S. Coast Guard to rethink its plan for 43 new berths in 10 locations where ships can stop and anchor while traveling between Albany and New York City.

Dozens of parked vessels, they said, would post a dire threat to a river with historic significance, scenic beauty and recreational riches that is in the midst of a decades-long, hard-fought environmental comeback. Also at risk: drinking water that serves communities on both sides.

“Nobody in our community,” Skartados said, “wants to see the river turned into a parking lot for barges and commercial boats.”  Read more.