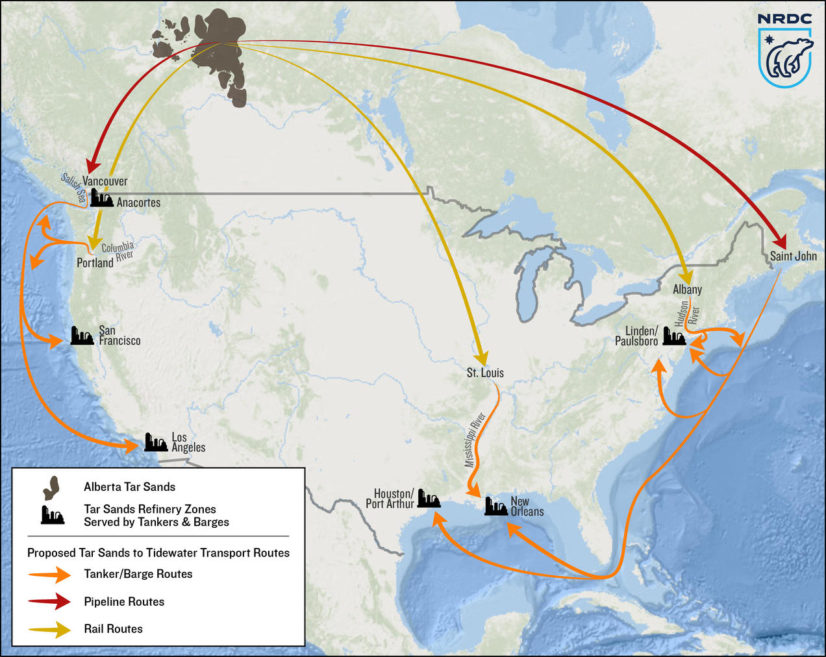 NRDC: In a new report, NRDC examines the impact a suite of new tar sands oil infrastructure proposals could have on America’s coasts and rivers if they were built. Ranging from coast to coast and leaving hardly any major U.S. waterway free from threat, these projects would facilitate more than 1.6 million barrels per day of new production and export capacity for Alberta’s tar sands industry or 60% growth over today’s levels. To move this massive amount of tar sands to refining markets in California, the Mid-Atlantic, and the Gulf Coast, industry will rely on at least 1,005 new tar sands tankers and barges—a 12-fold increase over the few vessels loaded today. In doing so, industry puts iconic landscapes including the Salish Sea, San Francisco Bay, the Gulf of Mexico, the Florida Keys, Cape Cod, and the Gulf of Maine at risk from a tar sands oil spill. Meanwhile, our major rivers—the Hudson, Mississippi, and Columbia—could all be impacted by these projects and their tankers and barges. Highly endangered marine species like Washington’s Killer Whales and the Gulf of Maine’s North Atlantic right whales, billion dollar regional fisheries, and the critical coastal tourism industry could all be devastated in the event of a spill.

For these reasons, NRDC has joined seven other organizations with members across the country to call on our decision-makers to stop this dangerous tar sands tanker threat from ever coming to U.S. waters. Together, we have collected more than 200,000 signatures demanding action now and we will be taking this call to local, state, and federal lawmakers in the coming months. Meanwhile, in Canada and across the U.S., opposition to these projects grows daily. This is especially true for the first of these projects to be approved—Kinder Morgan’s Trans Mountain tar sands pipeline expansion. In British Columbia, where most of this pipeline would be built, opposition from First Nations, cities and towns along its route, and residents on the British Columbian coastline is leading to a massive mobilization to stop the pipeline from ever being built.  Read more.  The report is here.