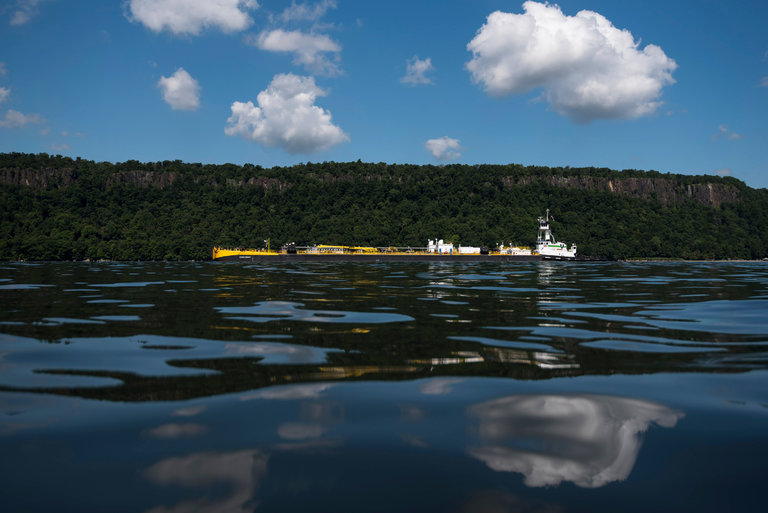 New York Times: Mayor Mike Spano of Yonkers likes to stroll along the Hudson River waterfront and marvel at the changes since the 1980s. Hundreds of millions of dollars in public and private investment have transformed a once forlorn riverfront marred by abandoned industry into a vibrant place where people live and play.

But a proposal to allow massive barges — up to 600 feet long — to anchor off the shore of the state’s fourth largest city here, just north of New York City, and in other spots stretching some 70 miles north to Kingston, threatens to undo that progress, Mr. Spano said. The plan, by the private maritime industry, would create 10 new anchorage sites along the Hudson River, with more than 40 berths, or parking spots.

The rise of the United States as a major oil producer in recent years is having unintended consequences for picturesque suburban communities that view the Hudson as a majestic backdrop, not a conduit for international trade. They fear that the very quality that makes these towns so charming — unfettered water views — will be destroyed.

In December, Congress ended a 40-year ban on the export of most crude oil produced in the lower 48 states, a move that came as the industry is booming, helped by new methods of blasting through hard rocks with water, sand and chemicals that have opened up areas for oil exploration. As a result, oil production has nearly doubled to more than nine million barrels a day.

But all of that oil needs to go somewhere, and that’s where rail lines and barges — and thus the Hudson River — come in.

Under the proposal, Yonkers and two villages to the north, Hastings-on-Hudson and Dobbs Ferry, would have by far the most barges at anchor, with 16 berths spread across 715 acres on the water. Officials and many residents say the plan would, in a sense, bring the communities that have worked hard to shed their industrial pasts back to the future.

“To reindustrialize the waterfronts of these communities would do long-term damage to what has been two decades of reinvestment taking place on our shores,” Mr. Spano said. “For us to go backward is just unconscionable.”

The proposal for berths on the Hudson came from maritime organizations worried about congestion on the river and the safety of barge operators. Earlier this year, the Maritime Association of the Port of New York and New Jersey and the American Waterways Operators asked the Coast Guard for permission to establish new anchorage sites on the Hudson.  Read more.