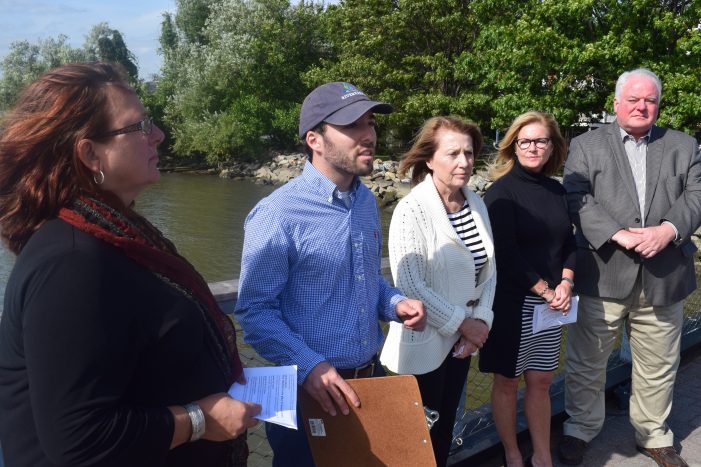 Highlands Current: At a Sept. 26 press conference at the Cold Spring riverfront, Putnam County officials and representatives from two regional environmental organizations spoke out against a plan to increase the number of oil-carrying barges on the Hudson.

The plan, which requires U.S. Coast Guard approval, was proposed by the Maritime Association of the Port of New York and New Jersey and the American Waterways Operators earlier this year and calls for 43 new anchorage spots between Yonkers and Albany, including space for up to five barges between Beacon and Newburgh, which the Maritime Association describes as “a major petroleum distribution center and prime deep-water port.”

Putnam County Legislator Barbara Scuccimarra, who represents Philipstown, said the scale of the proposal is a serious problem. “We’re not talking a few” barges, she said. “We’re talking a mile of barges. Not only are the barges parked there, they’re unlit and unmanned,” which could impact the environment, tourism, boating and fishing.

Scuccimarra noted that in 1963 a proposal to construct a hydroelectric plant on Storm King was defeated due to the efforts of community activists. “I’m hoping that will happen again,” she said.  Read more.