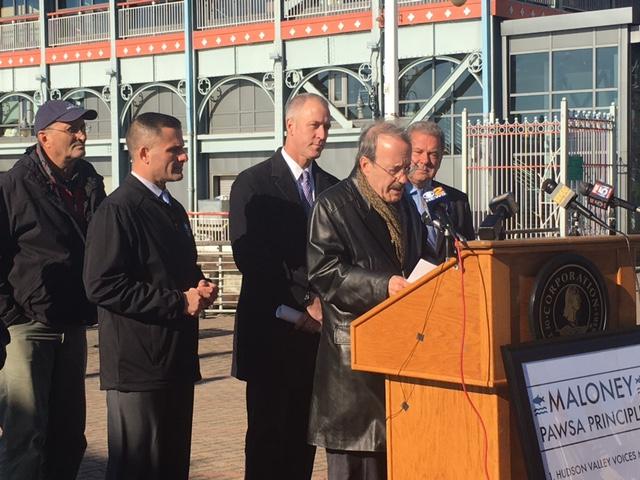 WAMC: Two Democratic New York Congressmen and local stakeholders stood at the Yonkers waterfront Monday afternoon to talk about potential anchorage proposals for the Hudson River. Though they praised a U.S. Coast Guard study, the lawmakers and environmentalists also made it clear they are doubling down on opposition to any long-term anchorage sites in future proposals.

The directed study came after the Coast Guard suspended the rulemaking process for a proposal of up to 10 additional anchorage sites from Westchester to Ulster County. Two workshops took place in November  — one in Poughkeepsie, one in Albany — as part of this study on safety along the river. The study is part of the Coast Guard’s PAWSA process, or Ports and Waterways Safety Assessment. Congressman Eliot Engel’s 16th House District includes Yonkers.

“The days when agencies and decisions can run roughshod over communities is over, and we’re not going to stand for it, certainly not those of us that represent Yonkers, Hastings or other communities up and down the water. So we’re going to continue to fight this. This is something that, whose time has not come, should not come and should never come,” Engel says. “And I will pledge to continue to oppose this, and we won’t stop till we win.”   Read more.