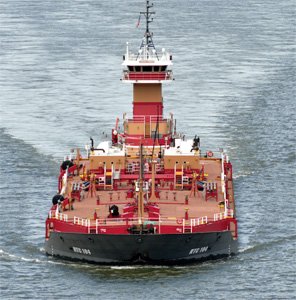 Professional Mariner: Until two years ago, the southerly movement of crude oil by barge between the Midwest and the Gulf Coast was almost nonexistent.

As a result of a boom in domestic oil production — particularly in the Bakken Shale formation that stretches from western North Dakota into Montana and Canada — tug and barge companies have jumped into the “black gold” rush and experienced unprecedented growth.

Kirby Corp., the industry’s largest company, was the first to receive public attention for loading crude onto barges in 2012 and transporting it south to refineries in the lower Mississippi and the Gulf Coast. Kirby said 7 percent of its inland business is crude, as of the second quarter of 2014. Other companies have stepped forward to claim a piece of the business.

“For many, many decades, crude oil movement in this country has been south to north,” said Darrell Conner, a government affairs counselor and transportation and trade expert for K&L Gates, an international law firm. “Now it is reversed. It’s moving north to south. The same thing has happened in the tug industry.”

“Oil is moving in a different direction; so is gas. What we’re seeing as a result of the shale plays is a renaissance of sorts,” he said. “Supply is coming from nontraditional sources and putting stresses on all modes of transportation to get the product to market.”

Data from the U.S. Energy Information Administration shows that stress, and the reason the tug and barge industry experienced such growth: In 2008, about 3.9 million barrels of crude were moved by barge from the Midwest to the Gulf Coast; in 2013, that number jumped to 46.7 million barrels.  Read more.