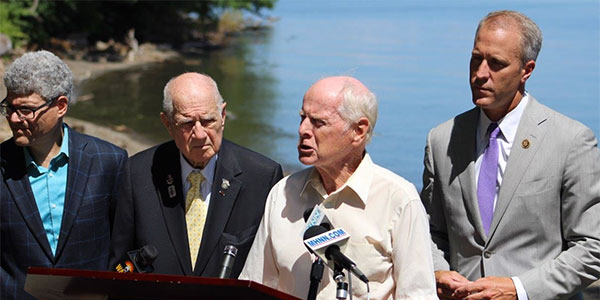 The proposal consists of having 43 new anchorages, at 10 different sites, covering an approximate 2,400 acres that would station barges carrying Bakken crude oil.

The Coast Guard has alluded to holding public hearings in a year. Maloney, along with elected officials in opposition to the Coast Guard’s proposal, said a year is too long to continue without public involvement.

He wants the community involvement moved up.

“It’s not good enough that you’re going to do it next year,” Maloney said. “You’ve got to take into account the opinions of local communities that will be seriously affected by the dramatic increase in the amount of anchoraging, and barging locations here on the Hudson River and you’ve got to figure out whether it’s going to hurt the environment or not, and that’s not too much to ask,” said Maloney. “It’s another example of entities in Washington, federal bureaucrats, charging ahead with something when they ought to be taking into account local opinions.”

Hudson Riverkeeper Paul Gallay, who stands with Maloney on the issue, said Riverkeeper has found empirical evidence of the improved health of the Hudson, in addition to the various communities’ waterfront revitalizations, river economy and river tourism benefits, all of which would plunge into disaster if there were to be a leak of Bakken crude from one of the barges. He said there is no benefit to the Hudson communities that would host these barges.  Read more.